Is the U.S. Finally Getting Smart About Payment Technology?

It took the hacking of 70 million Target credit cards during the 2013 holiday season to spur Congress into abandoning the highly unsecure magnetic-stripe cards used by most Americans and setting a deadline for the new (to the U.S., anyway) smart card technology. While Americans are just starting to learn what a smart card is, it’s been (successfully) used in other markets for more than 20 years, making the U.S. the only major market on the planet still using the swipe and sign technology.

Uses chip and PIN or chip and signature technology and multiple layers of security, including an embedded chip and unique identifier, which can change at any time.
Why is it better?
Hacking a system to gather information on a chip and creating a counterfeit credit card is too complicated.
With a magnetic stripe card, data can easily be read, written, deleted or changed with off-the-shelf equipment, leading to high credit card fraud.

Evolution of the Smart Card

Why is the U.S. Late to the Party?

Once implemented, the liability will no longer fall onto the consumer. 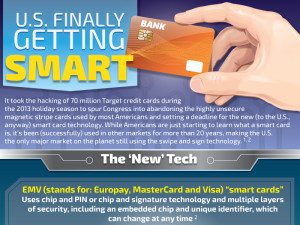