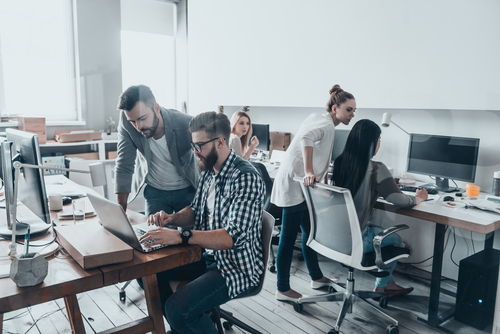 When it comes to choosing a college major, a career, or even a computer operating system, it helps to know the difference between computer software and computer hardware. While this distinction may seem straightforward to some people, the differences are actually quite complex and involve engineering techniques that carefully combine hardware with the appropriate software.

What Is Computer Hardware?

The hardware of a computer consists of the physical components that make processing data possible. The central processing unit, or CPU, contains data registers that work in conjunction with the cache to perform calculations at speeds of several billion clock cycles per second. The CPU also works in tandem with the random access memory, or RAM, to process all the data needed to run applications.

Depending on the speed of the RAM and bus of the motherboard, loading applications into memory can take a few seconds to more than a minute. During this time, applications typically display a splash screen to indicate that program information is being loaded into memory.

The CPU and RAM are connected to the motherboard, which is usually the largest piece of equipment inside the case of a PC. The motherboard is a large, flat circuit board with slots for the CPU, RAM, video and audio cards, and other on-board equipment. All of the internal components of a PC are powered by the power supply, which supplies electricity to various components through a network of cable connectors. The power supply is one of the most important components of the system because it determines how much power can be drawn by the processor, video card, and other pieces of equipment.

What Is Computer Software?

The term software refers to the operating system and applications installed on a computer. The software enables smartphones, tablets, PCs, embedded systems, and other devices to perform useful functions such as GPS navigation, video live streaming, Internet browsing, photo editing, and virtually anything else that can be imagined. Modern software has come a long way since the days of punch cards and tape machines. In the early days of computer science, programmers had to manually program their computers by punching notches and holes into paper tape and index cards. A computer was the size of a university laboratory, and it took months to execute a simple program that a modern smartphone can complete in seconds.

How Do Hardware and Software Work Together?

Computer software has to be designed to work properly with the hardware, so many technology companies employ hardware and software engineers to work together on products for consumers and businesses. The software can be any kind of programmed code that is executed by the hardware of a device. For example, the iOS operating system is developed and maintained by software engineers at Apple to optimize the performance of the iPhone and iPad, according to the Independent. In contrast, Google’s Android mobile operating system is a one-size-fits-all solution for thousands of different handsets and tablets. The iPhone may not have the memory or processing power of some of the high-end Android phones, but the iOS software is designed to perfectly utilize the hardware of the iPhone and iPad.

Computers, smartphones, and similar devices are quickly becoming inextricable from daily life. Whether you’re interested in computer hardware or computer software, understanding the difference between these concepts can be helpful in many situations.