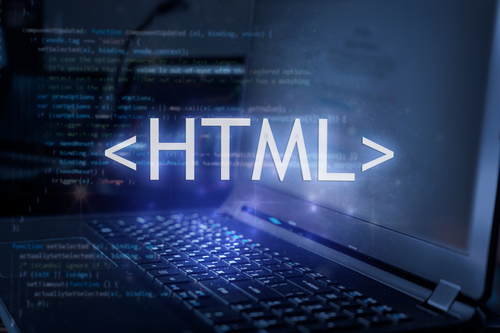 HTML, or “Hypertext Markup Language,” is a code used to build web pages and web applications accessed on the internet. The code was developed at the dawn of the World Wide Web in the late 1980s and early 1990s. The language allows website creators to tell an internet browser how to display elements like images, text, forms, and interactive features.

Website creators routinely use HTML alongside Cascading Style Sheets (CSS) and JavaScript, which are two other programming languages, to create sites and applications that users can access using internet browser programs like Chrome, Firefox, Safari, and Edge. Standards for HTML, as well as CSS, have been historically maintained by the World Wide Web Consortium (W3C).

It was in 1980 that Tim Berners-Lee, while working for the European Organization for Nuclear Research, began working on a prototype to HTML. By the end of the decade, Berners-Lee would create the now-ubiquitous language, as well as an internet browser and server software.

Over the next two decades, the World Wide Web Consortium (W3C) would continue development on an international standard for the code. In 1995, the second version of HTML was published, and several additional updates would follow over the next several years.

The State of HTML Today

HTML5 is the latest version released and was published as a “living standard,” which means it would exist as a continuously updated standard. Since 2004, the Web Hypertext Application Technology Working Group (WHATWG) has participated in the ever-evolving state of HTML.

WHATWG is a community with participants from technology giants like Apple, Google, Mozilla, and Microsoft, and the organization hasn’t always had the best relationship with W3C.

In fact, Information Technology publication The Register recently described WHATWG as a “splinter group” that would eventually overtake W3C with its power and influence in updating standards for HTML.

The Basics of HTML

HTML is a markup language, which is a phrase used to describe how a programmer can use code to label text. Markup languages like HTML and XML are readable by humans and are different from machine languages that are written in hexadecimal or binary code.

When using HTML to create a page on a website, the author will use several key components or attributes that any internet browser accessing the website will be able to read. Many of these attributes will come in pairs with a “start tag” and an “end tag.”

HTML is a Versatile and Accessible Language

A website programmer can use HTML attributes and elements to define virtually every facet of the page and how it will appear to the user. The programmer may utilize CSS and JavaScript, as well as additional languages like PHP, jQuery, and XML to build a website.

Novice programmers will often learn HTML as their first programming language and will continue their studies with advanced lessons on JavaScript and CSS.

Learning the basics of HTML can prove valuable for future programmers, as well as anyone who wishes to understand some of what’s required to create the web pages he or she reads each day on a computer or smartphone.