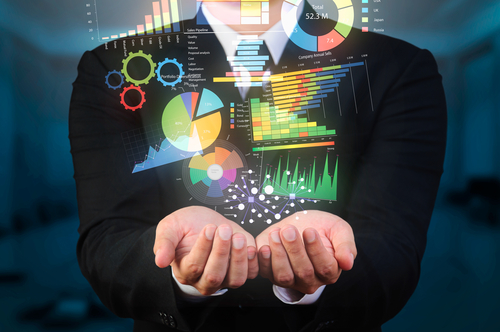 If you have ever participated in elementary school-level math or science work, or even looked at magazines or television enough, you’ve probably seen and even interpreted plenty of data visualization, or DV. What exactly is DV? Let’s take a look at the ins and outs of this valuable tool in the human conveyance of information.

At its core, data visualization is defined as the use of visual effects for the communication and demonstration of information. Graphs and charts are a commonly recognized example of techniques in the visualization of data. While these visual tools are certainly important today, in fact, the roots of DV go all the way back to the second century, C.E.

It was at this time that the first uses of a primitive plotting system for information were employed. As time rolled on, many other leading minds of the times put to use other, basic forms of DV. These included the famous mathematician, Rene Descartes and scientist, Jacques Bertin. Today, these forms of visual communication are used virtually everywhere and by everyone.

The extreme importance of DV in the modern world resides within the way that it communicates in ways that written literature often cannot. This visualization of data provides symbolic representation of information as opposed to representation by words. As stated by Thomas Powell, CEO of ZingChart and expert on DV, “When done well, visualizations explain complex ideas simply”.

The speed at which we can process and understand visual, symbolic presentations is much greater than written material in many cases. This is because our brains have used visual cues and symbols much longer than written language. As we are more apt to quickly decipher detailed information from a method of DV than a written composition, the DV is then a valuable and irreplaceable tool in the communication of information.

To illustrate some of the ways in which DV is put to work today, let’s take a look at a few, common examples.

TV commercials are often a big-time supplier of the visualization of data. These offerings can take the form of everything from formal graphs and charts, to entertaining presentations and special effects-filled demonstrations. These uses of DV are completely commercial, aimed at selling a product or idea.

In political campaigns, opposing candidates seek every way possible to convey certain points and facts that support their stances. Visual representations of this information are often the perfect way to communicate these ideas quickly and concisely. In addition, such visual tools can instill a certain sense of credibility and scientific backing to the ideas and their authors. Charts, graphs, number plots, and more are all suspect for use here.

In all areas of learning, science, and knowledge, the use of DV is abundant. A university may provide countless textbooks featuring various forms of DV. A manufacturing plant may provide its workforce with various forms of educational DV, each appropriate to that worker’s duties. Perhaps a research lab needs a clear, concise way to prove its progress to its funders. Tools for the visualization of data would most likely be used.

In times past, our distant relatives sought for ways to visually present data outside of written linguistics. Likewise, our modern times have called for the use of DV techniques in virtually all industries, sciences, and schools. This is the story of data visualization as we know it today.