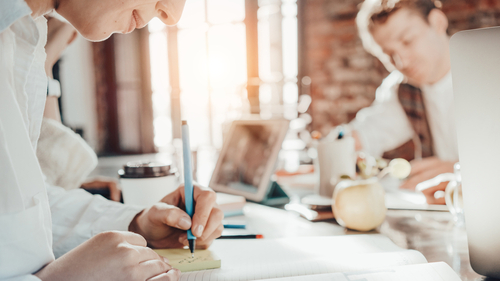 In today’s rapidly evolving and booming technology sector, a software developer is given the responsibility of overseeing the entire development process of computer programs to create optimum software for meeting user needs. Software developers are currently in high demand due to the substantial growth in the number of computer systems and mobile technology that use software. As more and more of our digital world becomes computerized, employment for software developers is expected to skyrocket much faster than average at the rapid rate of 22 percent, thus creating an estimated 222,600 new jobs before 2022. In helping you determine if this is a right career move for you, below we have included a full job description for software developers.

Computer science students should understand the duties of a software developer before embarking on a four-year degree program. Developers use their knowledge of computer science and programming to design applications for all types of electronic devices. They work in a wide range of environments in cities across the country, collaborating with large teams on projects that can span weeks or months. As developers acquire experience, they can take on greater responsibilities within their organizations, earning more money and gaining specialized skills.

What Software Developers Do 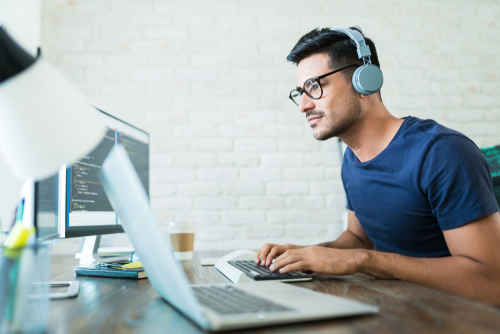 Software developers are the creative minds that are responsible for developing the applications that enable users to complete specific tasks on a device as well as designing the underlying computer systems that allow these devices to run properly. On a typical day, software developers can be found analyzing users’ needs, designing software programs to meet those needs, recommending new software upgrades, creating applications or systems, instructing the programmer to write the software code, guaranteeing software functions appropriately, conducting software maintenance, and documenting application aspects for future upgrades. In some cases, software developers will manage an entire software project from the planning stages through implementation to meet all deadlines and cost budgets.

The duties of a software developer are extensive and varied. Depending on a developer’s role in a project, he or she may focus on designing applications from the top down or engineering solutions to overarching programming problems. Software developers use abstract design patterns to build applications the way artists use abstract shapes to block out characters before filling in the details and shading. Design patterns are the basic forms that all programs consist of at the most fundamental level.

Over the last half century of object-oriented programming, developers have put together a collection of these patterns to reuse in their programming projects. Reuse is the software design principle that helps developers work quickly by building applications from time-tested parts. Because they know that each pattern solves a particular programming problem, they don’t have to waste time designing and testing new solutions.

According to the Bureau of Labor Statistics, there are approximately one million software developers currently employed in a variety of settings across the United States. Although the majority of software developers work in computer systems design and related services, other plentiful job opportunities exist in software publishing firms, corporate headquarters, insurance carriers, computer or electronic product manufacturers, financial institutions, and educational services. Since software development is a highly collaborative process, most developers will spend a significant amount of time working on teams with other professionals who design, develop, and program software programs successfully. Most software developers work full-time with longer than the standard 40-hour work week, but those who are self-employed or telecommute will have added flexibility in creating their schedule.

In most cases, employees in these complexes may come and go as they please because their employers aim to minimize restrictions on their creativity. As a developer gains experience, he or she will typically have greater personal autonomy. Eventually, a software developer could begin working in a freelance capacity as a consultant or specialist, logging in remotely or appearing in person as needed.

How to Become a Software Developer 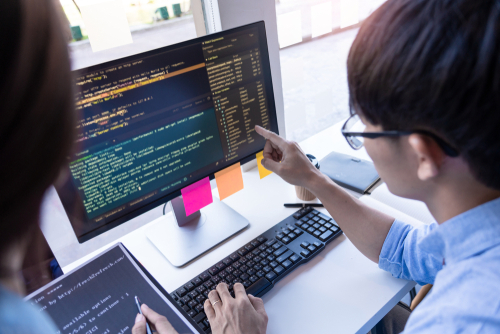 For obtaining successful employment in software development, it is typically required that job candidates possess at least a four-year bachelor’s degree from an accredited institution. In order to build the essential computer skills, the majority of software developers decide to pursue their degree in computer science, information technology, software engineering, electrical engineering, or even mathematics. Regardless of the degree chosen, it is critical that you fill your course schedule with classes related to building software and computer programming. To help advance your career prospects, you may also want to consider earning credentials as a Certified Software Development Professional (CSDP) by passing the certification examination administered through the IEEE Computer Society.

As the job market expands to accommodate new workers, the education requirements for employment also increase. To remain competitive with other software developers, job seekers should be able to demonstrate as many unique qualifications as possible. Most developer jobs are available to applicants with only a bachelor’s degree, but job seekers with master’s degrees will have even better opportunities.

Software developers should sincerely enjoy solving technical problems using math and computer science. They should be able to spend day after day in front of a computer, typing and debugging thousands of lines of code. Developers must know how to write programs in many languages, and they must understand the theoretical side of computer science, as well.

While education is important to employers, being able to code is more important, and many developers fail the basic coding tests they take during their job interviews. Before applying for a position, it’s important to be ready to pass one of these tests, which typically cover topics such as programming languages and algorithm analysis.

The Daily Duties of a Software Developer 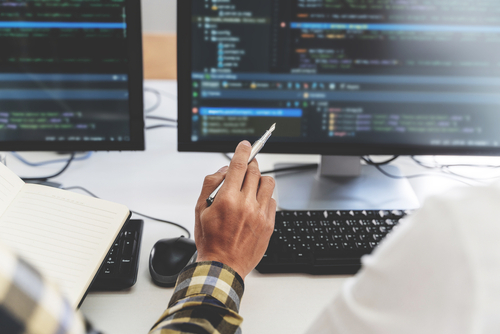 From outlining the structure of a program to debugging the finished product, the duties of a software developer encompass every aspect of application design. Developers with special expertise, such as machine learning or data mining, may work in a focused capacity as each project requires.

Most developers will work on teams of programmers producing software for websites and mobile devices. Each day, they will focus on their assigned sections of a project, submitting their work to a distributed version control system, such as Git or Mercurial. A DVCS handles updates to a project without overwriting existing code with untested code.

Using a DVCS, developers can submit their work from any computer with an internet connection, so their employers may expect them to keep working after going home for the day. As developers gain experience, their workdays typically become less burdensome and tedious. Senior developers are responsible for the overall functionality and timeliness of each project.

As a developer’s skill set grows, he or she will become qualified for higher-paying positions, such as senior developer, project leader or specialist. Developers may also choose to make a lateral career move to work in management information systems, a high-paying alternative to software engineering that requires business management skills.

Some companies make a distinction between software developers and programmers. In these workplaces, developers take a leading role in designing and engineering applications while programmers offer support with their coding skills. A lead developer must understand concepts such as programming patterns, discrete mathematics, formal logic and recursive and loop-based algorithm implementation.

As the market for software grows, developers fill an ever-expanding niche in the economy. Traditionally, developers worked for companies producing desktop software for personal computers or custom software for corporate clients. Before high-speed internet became ubiquitous, software applications shipped out on floppy discs, CDs or DVDs. These programs required installation on a hard drive, and they worked only with the operating system for which they were designed. Cross-platform compatibility required “porting” a program for additional operating systems, which was one of the duties of a software developer.

With the global spread of high-speed internet, most software is now web-based although some programs still require a download and installation on a hardware drive. Today, software developer jobs include web, mobile and desktop application design.

With advanced education, developers can specialize in a particular area to increase their employment opportunities and earning potential. Undergraduate computer science programs usually offer a business track and a science track for students interested in one or the other career path.

With the business track, students can enter the workforce immediately after earning a bachelor’s degree. Alternatively, they may choose to continue on to graduate school to pursue a master’s degree in business administration. The science track prepares students for postgraduate studies in computer science, including research in artificial intelligence, human-computer interaction, robotics and other advanced subjects.

Whether a student chooses the business or science track, he or she will be qualified to apply for high-paying jobs directly after earning a bachelor’s degree. From web design to mobile game development, the career paths open to software developers include choices for a wide range of interests and personality types.

As the market for mobile device applications grows, developers will have ample opportunities designing games, utilities and productivity software for platforms such as iOS, Android and Windows Mobile. Other opportunities may include jobs in web design, operating system development and traditional desktop application development.

One of the top job alternatives to software engineering is computer and information systems management. As managers, these professionals take on leadership responsibilities within their organizations. They plan and coordinate the execution of projects, working with developers, programmers and project managers to ensure that these teams meet their targets and complete each project on time and within the assigned budget.

Software developer jobs will increase by 22 percent from 2020 to 2030, according to the BLS. Compared to the overall job market, which grows at 4 percent per year, software engineering is one of the fastest-growing fields in the economy.

While programmers and web developers will have excellent job prospects over the next decade, quality assurance analysts and software testers will have even better opportunities. Education is one of the most important requirements for obtaining a software developer job. Most employers hire developers with only a bachelor’s degree, but specialized jobs may require advanced education or an equivalent amount of experience.

The Best States to Find Work

The states employing the largest numbers of software developers are California, Texas, Washington, New York and Virginia. With almost 250,000 developers statewide, California employs more than twice as many developers as the next highest-employing state, Texas. In California, the home of Silicon Valley, developers can find work in established tech companies as well as startup firms, which may offer valuable shares of stock to employees who join early.

The states and territories where developers earn the highest salaries are Washington, California, New York, Massachusetts and Washington, D.C. While average earnings for developers in these locations often exceed $120,000, their cost of living is also quite high.

Overall, software developers are highly trained computer experts who are well compensated with an average annual salary of $90,060 for their work in designing, testing, developing, and upgrading software programs to meet user needs in our fast-paced digital world. If you possess strong analytical, communication, interpersonal, critical thinking and problem solving skills with a passion for working with computers, you consider joining the booming high-tech industry as a software developer.

Software development is one of the fastest-growing occupations in the country, and employers are frequently adding new workers to their payrolls. To be competitive in this field, it’s important to become familiar with the professional duties of a software developer.