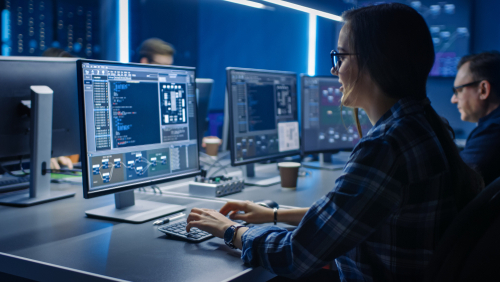 The best way to stay ahead of the curve in the computer programming world is to make sure that programming language proficiency aligns with current industry needs. Thanks to the nature of technology and its rapid pace of development, those needs seem to always be changing on a yearly basis. For good reason, many of today’s computer science students and seasoned programmers alike simply wonder one thing: Which programming language is the best one to learn for future utility and profitability? It’s a question that isn’t easily answered, largely because there are simply so many different languages constantly in use to make the Internet, desktop, and mobile venues work so seamlessly. Even so, there are some general guidelines that will steer programmers toward the best choice for programming work this year and in the immediate future.

Computer programming isn’t all about desktop or mobile app development. In fact, a large number of programmers create websites and web applications that use an entirely different set of languages, rules, and routines. A significant number of languages exist just for the web: Legacy languages like Python and CGI, as well as more modern options like PHP, Java, ASP, Ruby on Rails, JavaScript, and scores of others that have been buzzwords at one time or another. Due to the current nature of Internet programming, however, there really are only two languages that programmers most need to learn in 2014. The first of these is PHP, which has emerged as the single most common language used by developers creating web-based applications. Used by the likes of WordPress, Tumblr, and even Twitter, PHP is a must-have tool in any arsenal. The second must-have language is JavaScript. The language once known as a mere nuisance can now be used to create smooth web experiences, entire applications, and immersive media opportunities that align with current use patterns.

Desktop Programmers: Look Out for the Big “C”

At Apple’s 2014 World Wide Developers Conference (WWDC), the company announced that it was leaving “C” behind in terms of computer programming. The company would instead shift to its new, C-free language, known as Swift. While this is a must-have language that all OS X or iOS developers must learn as soon as possible, it’s perhaps not the top priority in an industry that also accommodates Windows and Linux users.

In addition to the brand-new Swift language, developers need to maintain their focus on the C-based programming routines that have served them well for a very, very long time. That means sticking with languages like C#, Objective-C, Cocoa, C, and C++. Each of these languages presents an opportunity to accommodate a different platform and reach users in a way that is well known, familiar, and a bit easier to execute. While new languages are always tempting, today’s programmers should first make sure that they are fully fluent in legacy languages and those that remain the most popular for cross-platform, cross-device programming and app development.

In a Fast-Paced world, Changes Can Happen Almost Overnight

Apple unveiled a new language, known as Swift, which took its entire development community by storm in just a few minutes. Other companies might just be working on similar projects that have yet to come to light. While the programming language options mentioned above are currently the must-know options for app developers, such trends should be continually revisited in an effort to stay current and compatible for the widest segment of users.