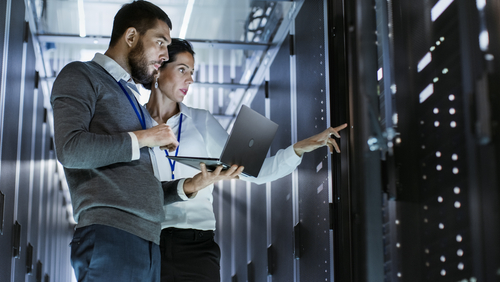 A person who wants to earn a degree in information technology (IT) or computer science likely wants to know, “How is the career outlook for IT jobs?” With machine learning, there may be fewer of some types of IT jobs, but in general, the Bureau of Labor Statistics (BLS) expects that employment in computer and information technology occupations will grow by an average of 12 percent between 2018 and 2028. Knowing more about the career outlook for IT jobs could help a person hone their area of expertise.

Current Employment Statistics for IT Jobs

As of 2018, about 5,100,000 people in the United States were employed in computer and IT jobs. The BLS estimates that between 2018 and 2028, there will be a 12 percent rate of growth in these occupations. This amounts to about 546,000 more jobs in IT. The occupations under the umbrella of IT include computer and information research scientists, computer network architects, computer programmers, computer support specialists, computer systems analysts, database administrators, information security analysts, network and computer systems administrators, software developers and web developers.

Occupations in IT With the Most Growth Potential

Places With the Highest Numbers of IT Jobs

Some places have more jobs in IT than others. The five states with the highest numbers of IT jobs include Virginia, Texas, California, New York and Florida. The metropolitan areas with the most IT jobs include Washington, D.C., New York City, Dallas, Chicago, Boston, San Jose, Los Angeles, Baltimore, Atlanta, Seattle, Philadelphia, and Minneapolis.

Other Factors for the Career Outlook in IT Jobs

There are a few factors that could change the overall outlook for IT jobs as well as an individual’s outlook for employment. A recession of the economy could decrease the projected growth rate for IT jobs, much like what happened in 2000 to 2001 and again from 2007 through 2009. The level of degree that a person has could affect their marketability. Web developer jobs may only require an associate’s degree, but most IT occupations require a bachelor’s degree for entry-level jobs, explains the Bureau of Labor Statistics. Computer and information research scientists typically need a master’s degree for an entry-level job.

The career outlook for employment in IT occupations looks good through the upcoming years. A person who is entering an undergraduate degree program or completing one should come into a healthy job market. Knowing, “How is the career outlook for IT jobs?” gives a person a chance to hone their skills and make themselves as marketable as possible.