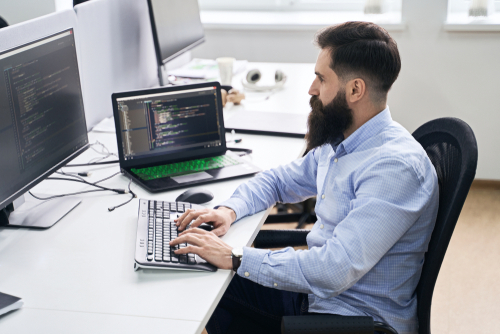 Here’s a question: What degree allows its holder to work in just about any industry in the world? The answer to this question isn’t as tricky as it seems. It’s computer science, and pretty much every industry from trucking and transportation to animation and entertainment needs computer scientists.

That said, there is a flip side to this demand: desire. While the trajectory of the career looks promising, it’s wise to consider every aspect of this career, including its demands and the temperament of those who are considering computer science jobs.

An article in the US News and World Report calls this a “golden age” for computer science. Jobs in the computer science sector are expected to grow by 13 percent through the year 2026. Salaries for these jobs often reach six figures, with software developers receiving over $105,000 a year on average. Similarly, computer network architects can expect to take home up to $109,000 on average, while computer and information research scientists can earn up to $118,000. Of the hottest jobs for 2020, jobs related to computer science rank right up there with jobs in the medical field, management and speech pathology, according to CNBC.

Additionally, it is, as has been mentioned, a degree that fits into just about every industry in the world. This makes it a degree that automatically creates transferable skills. This means that the holder of a computer science degree can start out in one industry and then switch industries if necessary. The ability to work with data and code (and other related skills) is more important than the industry itself if push comes to shove.

A computer science degree emphasizes coursework that is heavy in math, including analytics and data science and coding and programming. People who major in this degree learn about web development, too, according to Free Code Camp.

People who don’t like computer science shouldn’t pursue the degree. The salaries that come attached to the jobs are what attract many people. However, this sort of job requires the ability to think analytically and a desire to problem-solve. Not everyone enjoys doing this day in and day out.

There is also some question about whether or not it’s okay to be a self-taught programmer. While there may be some companies in the industry that will work with talented, self-taught programmers, many computer science jobs require at least a bachelor’s degree, according to Rasmussen College. These degree programs not only prepare students for the real world, the university departments offering the degree may become a source of job connections.

For the next several years, it is predicted that the computer science field will continue to grow. It’s not difficult to see why. Aside from the promise of a good salary, these jobs also promise entry into some of the most interesting industries. However, not everyone who is asking themselves, “How do I know if computer science is a good degree path for me,” should get jobs in the industry. Those who don’t enjoy spending their work hours on problem-solving and analysis probably won’t enjoy this job very much.